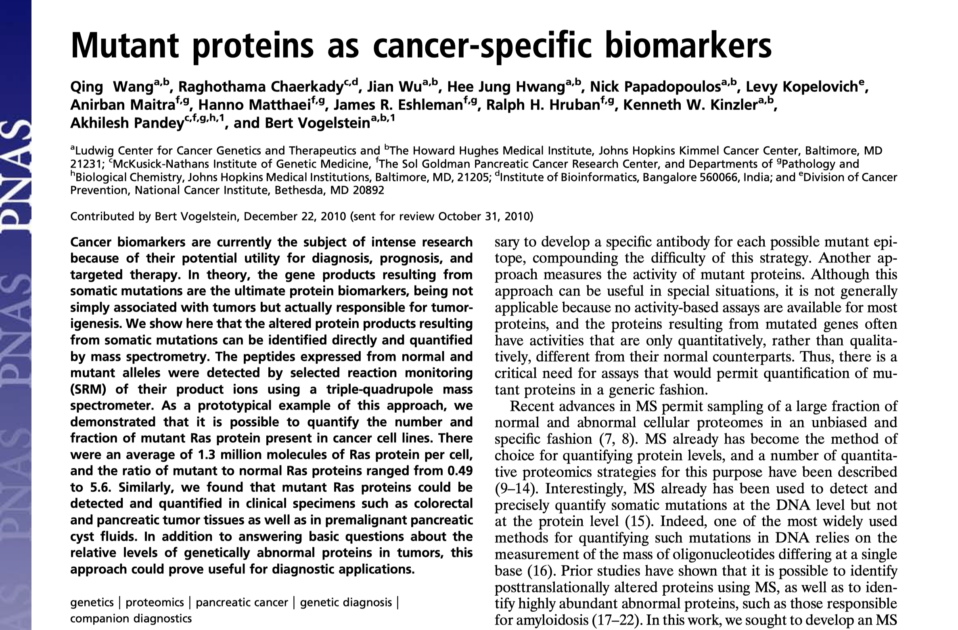 Cancer biomarkers are currently the subject of intense research because of their potential utility for diagnosis, prognosis, and targeted therapy. In theory, the gene products resulting from somatic mutations are the ultimate protein biomarkers, being not simply associated with tumors but actually responsible for tumorigenesis. In 2010, we developed the 1st pipeline for detecting and quantifying mutant protein as cancer specific biomarkers from human specimens, and it received a broad range of attentions from different disciplines of biomedical sciences [Ref. 1].

We demonstrated that altered protein products resulting from somatic mutations can be identified directly and quantified. As a prototypical example of this approach, we demonstrated that it is possible to quantify the number and fraction of mutant Ras protein present in cancer cell lines. There were an average of 1.3 million molecules of Ras protein per cell, and the ratio of mutant to normal Ras proteins ranged from 0.49 to 5.6. Similarly, we found that mutant Ras proteins could be detected and quantified in clinical specimens such as colorectal and pancreatic tumor tissues as well as in premalignant pancreatic cyst fluids. In addition to answering basic questions about the relative levels of genetically abnormal proteins in tumors, this approach lays the foundation for mutant protein-based cancer diagnostics.

Your ticket for the: MT-SRM, direct detection of mutant proteins as cancer-specific biomarkers