MANA-SRM pipeline and its application in personalized cancer therapeutics. 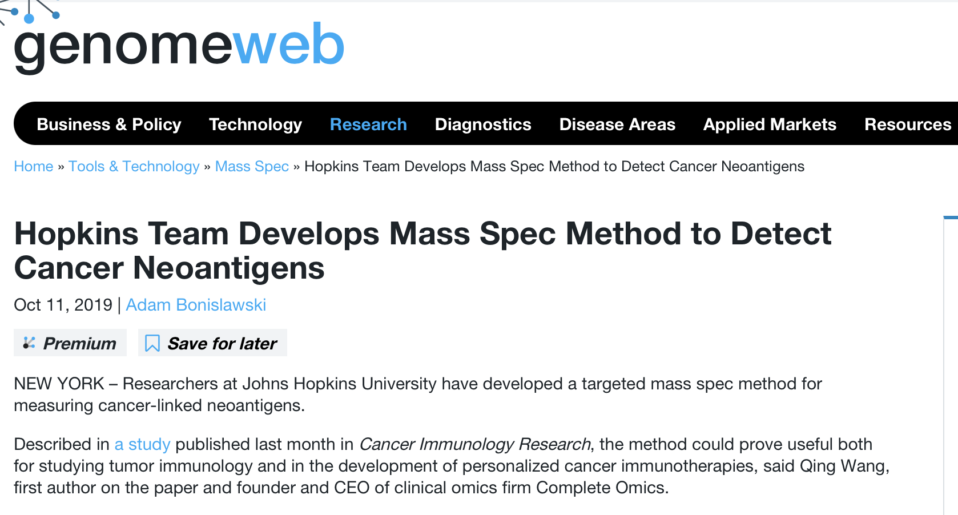 Described in a study published last month in Cancer Immunology Research, the method could prove useful both for studying tumor immunology and in the development of personalized cancer immunotherapies, said Qing Wang, first author on the paper and founder and CEO of clinical omics firm Complete Omics.

Wang was previously a researcher in the lab of Johns Hopkins University professor Bert Vogelstein, who was senior author on the study. The method makes use of the sequential analysis of fractionated eluates by SRM (SAFE-SRM) mass spec method previously developed by Wang, Vogelstein, and their colleagues.

Cancer-linked genetic mutations can code for mutant proteins, which can then be processed by proteasomes into peptides that are presented by human leukocyte antigen (HLA) molecules, triggering the body’s immune response. The idea that such mutant peptides can trigger an immune response is fundamental to immunotherapies like checkpoint inhibitors as well as cancer vaccines that present the body with these peptides to generate an immune reaction.

However, while the rise of next-generation sequencing has allowed researchers to identify a large number of cancer-linked mutations, actually detecting these mutation-associated neo-antigens, or MANAs, at the peptide level remains difficult. The fact that a mutant is present at the genetic level does not mean it will be produced at the protein level, and, even if it is, that is no guarantee that it will be processed and presented by HLA molecules.

This has proved a challenge for, for instance, personalized cancer vaccine development, Wang said. “We have spent a lot of time doing research to making vaccines against neoantigens that we found are not present.”

This problem, he said, led the researchers to explore ways to detect MANA peptides directly.

Mass spectrometry offers one potential way forward, but given the low abundance of any particular MANA peptide, sensitivity is a limiting factor.

To address this, Wang and his colleagues applied their SAFE-SRM approach, which they initially developed to aid analysis of circulating protein markers that could boost the performance of the circulating tumor DNA-based tests Vogelstein and his collaborators are developing for the early detection of cancer.

The method uses extensive fractionation to divide samples into smaller, less complex subsamples that can be analyzed at greater depth. It uses labeled peptide standards to target MANA peptides to monitor which fractions these peptides elute into. Researchers can then analyze those fractions using SRM mass spec assays to the target peptides.

In the case of the MANA peptide work, the researchers also needed to develop an effective assay for extracting and pulling down the HLA molecules for mass spec analysis. One challenge was how to functionalize beads with anti-HLA antibodies for pulldown of the molecules without having these antibodies co-elute with the target peptides, which could lead to ion suppression and a decrease in the assay’s sensitivity. The researchers tested a variety of antibody-bead crosslinking conditions to optimize the antibodies’ effectiveness at pulling down HLA molecules while remaining bound to the beads during elution.

Additionally, the researchers had to deal with the fact that many MANA peptides contain cysteine and methionine residues, which are typically not good candidates for targeted mass spec analysis due to their instability. In a typical targeted protein assay, researchers have a variety of peptides they can select for analysis and so are able to choose those that are optimal for mass spec-based measurements. That wasn’t possible with the MANA peptides, though, and so Wang and his colleagues used a reduction step to stabilize these amino acids, making the peptides better suited for mass spec.

“We found that without this reduction step some of these peptides weren’t identifiable,” he said, noting that it improved the signal generated by these peptides by as much as 300-fold. “That is a step that is quite unique and really necessary for this kind of neoantigen detection.”

To test the method, the researchers transfected cell lines with HLA genes and oncogenes predicted to produce mutant proteins that would bind to the HLA molecules. They then applied the approach to see if they could detect HLA-bound MANA peptides, finding that they were able to detect several mutant forms of KRAS along with one from the protein IDH2.

They also analyzed Hs578.T lung cancer cells known to harbor a KRAS G12D mutation, finding that they could detect copies of the 9-mer G12D peptide, though not the 10-mer form, which was also predicted to be present.

Wang said he believed the technique could be most immediately useful for helping to determine for common hotspot mutations which MANA peptides may be produced in which tumor cells and at what levels of abundance.

“We want to create a table [with this information] for, say, the top 100 most frequently mutated cancer genes,” he said, noting that this information could help guide immunotherapy research targeting these genes.

“I think that is the shortest route to benefiting the most patients at the moment,” he said.

Wang said that ultimately the method could potentially be used to identify MANA peptides directly from patient samples, allowing researchers to profile the production of peptides not produced by one of the more common mutations he hopes to focus on first.

“The cost of doing that would be high at the moment, though,” he said. “So, we believe that we should start with the mutations that are highly prevalent in most cancer patients and then further [develop] this technology to make it practically affordable for the patient who wants to known their specific [MANA] target but who don’t have those [common] hotspot mutations.”

Wang said that he planned to do this work through Complete Omics, which he founded last year. He said that the company does not yet have any commercial offerings but is in the process of building out its technology platforms.

Your ticket for the: MANA-SRM pipeline and its application in personalized cancer therapeutics.

MANA-SRM pipeline and its application in personalized cancer therapeutics.