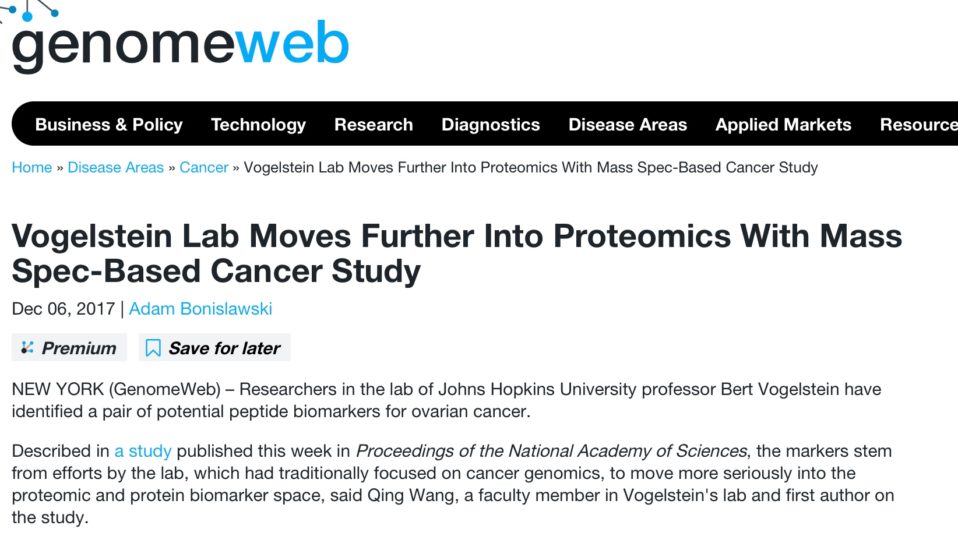 Described in a study published this week in Proceedings of the National Academy of Sciences, the markers stem from efforts by the lab, which had traditionally focused on cancer genomics, to move more seriously into the proteomic and protein biomarker space, said Qing Wang, a faculty member in Vogelstein’s lab and first author on the study.

The peptide markers were validated using a selected-reaction monitoring system developed by Wang and his colleagues that uses light-labeled peptides and extensive fractionation to enable highly sensitive and reproducible quantitation of candidate biomarkers in plasma.

Vogelstein is a professor of oncology and pathology at Johns Hopkins Medical School and the Sidney Kimmel Comprehensive Cancer Center, and a pioneer in cancer genomics. But while his lab’s work has been primarily genomics-focused, he and his colleagues are also exploring the potential of protein and peptide markers for uses like early detection.

For instance, in a PNAS paper published in September, Vogelstein and his collaborators used circulating tumor DNA combined with four blood-based protein markers for the detection of early-stage pancreatic cancer. Using this set of markers, they were able to detect early-stage disease in 64 percent of patients, compared to 30 percent for ctDNA analysis alone, and 49 percent for protein analysis alone.

As Vogelstein noted at the time, a substantial portion of stage I cancers don’t appear to have detectable ctDNA, which means researchers will have to turn to other analytes to up the sensitivity of this early detection approach. At the same time, protein and peptide biomarkers can be relatively non-specific, leading to high numbers of false positives. The hope is that combining the tool will improve the performance of such assays to the point where they could be useful for early detection of cancer.

“We are trying to build a more sensitive and specific [test] particularly for early-stage cancer diagnosis,” Wang said. “Proteins have the best sensitivity, but the specificity will need to be provided by ctDNA or [specific] mutated proteins or something like that. That is the basic idea.”

Of course, while cancer-linked peptides and proteins might in theory be more abundant in early-stage disease than ctDNA, actually identifying and quantifying these analytes in clinical samples presents a considerable challenge, Wang said, hitting on a difficulty that has been central to proteomics and protein biomarker development work.

Echoing many in the field, Wang noted that “there is no PCR for proteins,” and, in the absence of such an amplifying technology, researchers need instrumentation and techniques capable of sifting through the great complexity and high dynamic range of plasma to pick out the specific markers they are targeting.

Researchers are pursuing a variety of approaches to address this issue ranging from upfront immunoenrichment methods to different separation techniques. A key challenge is balancing the high throughput required for running the large numbers of samples needed in clinical validation against the time requirements of the sort of mass spec workflows that enable highly sensitive and reproducible quantification of often low abundance molecules.

The SRM method developed by Wang and his colleagues and described in the PNAS paper trades throughput for sensitivity. Called sequential analysis of fractionated eluates by SRM (SAFE-SRM), the approach using extensive fractionation to divide patient samples into smaller, less complex sub-samples that are then analyzed via SRM.

Wang noted, however, that SAFE-SRM uses light peptide standards which are much less expensive than the heavy-labeled standards used in the Deep-Dive SRM approach. He added that heavy-labeled standards can also cause ion suppression effects which can reduce the sensitivity of the assay. According to the PNNL researchers, the Deep-Dive SRM method can quantify proteins in serum at levels in the range of 10 picograms per mL. Wang said that the SAFE-SRM method was able to measure the the peptidyl-prolyl cis–trans isomerase A (PPIA) peptides identified in the PNAS study as potential ovarian cancer markers with a limit of detection of 9 picograms per ml and limit of quantification of 90 picograms per ml.

SAFE-SRM, however, uses upfront depletion of high abundance proteins, which Deep-Dive SRM does not. Such depletion steps improve sensitivity but can be expensive and can affect reproducibility.

Because of the extensive fractionation involved, neither method is well-suited to high-throughput clinical validation. A typical SAFE-SRM experiment validating sets of candidate peptides identified via discovery work would divide samples into at least 20 fractions, Wang said, and then run each of those fractions on a 70 minute LC gradient.

“So we can probably only analyze one patient per day,” he said. He added that as the researchers narrowed the number of peptides they measured, throughput would go up to perhaps around 20 samples per day as they would only need to analyze the fraction containing the peptide of interest.

Wang suggested that applying multiplexing approaches like isobaric labeling could further boost throughput to perhaps the range of 100 to 200 samples per day. He and his colleagues have not yet optimized such an approach, but it would likely add to the workflow’s cost and complexity.

Most likely, extensive clinical validation would be done using immunoassays, Wang said, noting that a group of his colleagues are working on ELISAs targeting the two PPIA peptides.

The researchers identified these peptides an initial mass spec-based discovery experiment in which they analyzed plasma samples from 50 normal healthy individuals, 18 patients with ovarian cancer, 13 patients with pancreatic cancer, and 18 patients with colorectal cancer. From this they identified 641 candidate peptide markers, 318 of which could be reproducibly detected.

Wang said he and his colleagues are now collecting additional clinical samples with the goal of testing the peptides, using immunoassays, in a 3,000-patient cohort.

He added that the researchers are using the SAFE-SRM workflow to look for protein and peptide markers in 17 additional cancer types while also working to refine the approach by automating portions of the method including mass spec peak identification.

The Vogelstein lab is also developing a mass spec-based proteogenomic approach to identifying what genetic mutations are expressed at the protein level in cancer patients in hopes of better determining druggable targets.

“A patient may have a hotspot mutation and 100 other passenger mutations,” Wang said, but, he added, it can be difficult to know from the genetic data alone which of those mutations are actually expressed as proteins.

“So we are developing a mass spec-based approach to identifying and quantifying which of those specific mutant proteins or peptides can be detected from patient blood and tumors,” he said.

Your ticket for the: SAFE-SRM, 1st pipeline for clinical proteomics